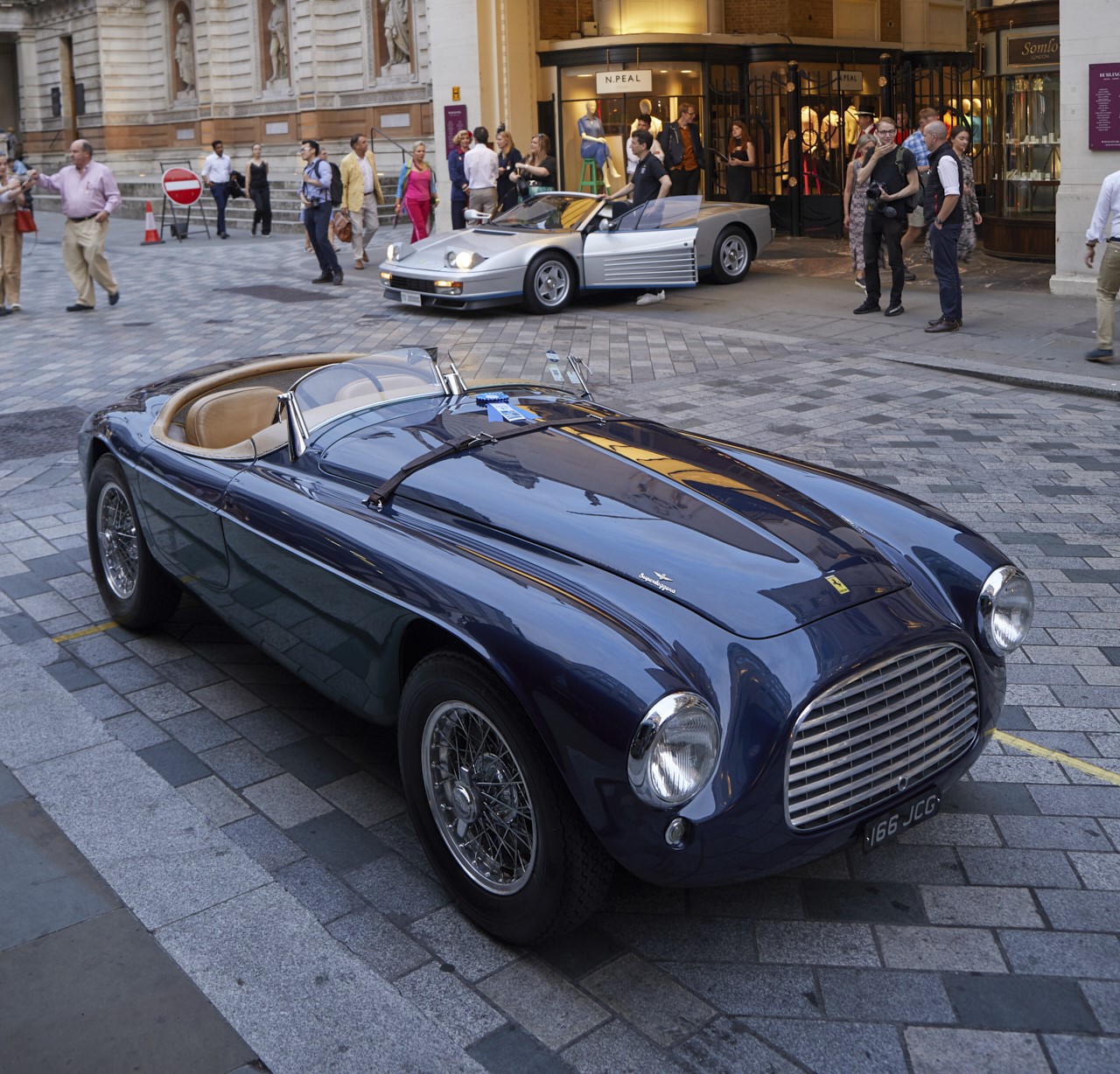 A Ferrari 166MM Barchetta built for Giovanni Agnelli has won Best In Show at the inaugural Concours on Savile Row, chosen by Westminster City Lions acting as Hagerty Youth Judges.

The Westminster City Lions is an organisation aimed at introducing young people aged between 13-17 to new potential career opportunities and interests, and the Hagerty Youth Judging Programme is aimed at introducing young people to the automotive world. The ten Westminster City Lions were split into two groups to evaluate the style, history and importance of the 33 cars on show, and were also introduced to the world of tailoring at Cifonelli, as well as talking to McLaren engineer and STEM ambassador Ella Podmore MBE.

The winning Ferrari 166MM is number 24 of 25 built. Agnelli oversaw the car’s creation by Carrozzeria Touring personally; the two-tone paint, custom dashboard and teardrop rear lights are unique to this car.

Based on the 125S, the MM Barchetta revolutionised sports car design with its V12 engine and ultra-thin Superleggera bodywork, and established Ferrari in international racing with victories at the 1949 Mille Miglia, Le Mans and Spa.

Following Agnelli’s stewardship, the car was owned by Ecurie Francorchamps’ Jacques Swaters for 46 years, during which it was nicknamed Nonna, Italian for Grandma. Swaters restored the car and had the car displayed at the New York Museum of Modern Art. The current owner, Clive Beecham, bought the car in 2012 and drove it in the Mille Miglia in 2013 and 2018, and won the Coppo D’Oro at Villa d’Este in 2015. It also appeared in two exhibitions at Modena’s Enzo Ferrari Museum.

Second place went to Cici Muldoon’s Ferrari 250GT PF Coupé. Chassis number 1743GT is one of just 353 examples built. This is the last of three iterations of the model, and was commissioned by 1957 European hillclimb champion Willy Daetwyler, and supplied via Eleanor von Neumann’s Los Angeles dealership. It was specified with a competition engine featuring three Weber 40 DCL/6 carburettors, high-lift camshafts and velocity stacks, along with disc brakes, a limited-slip differential, Borrani wire wheels and an Abarth exhaust. Much of its life has been spent in the USA, and has only recently been imported to the UK.

Third place went to Simon Taylor’s Bentley 4 1/4 Litre Sedanca Coupé. Commissioned in 1936 by the Vicomtesse Yvonne Cahen d’Anvers, this Bentley was bodied by Gurney Nutting in a style similar to that of the Hispano-Suiza of her husband, Anthony Gustav de Rothschild. The sweeping coupé was a marked contrast to the more reserved Gurney Nutting offerings, but it took so long to construct that the Vicomtesse lost interest and bought something else.

HR Owen promptly sold it, and after 20 years the car headed to the USA. It stayed there until the late 1990s, when the current owner, journalist and commentator Simon Taylor, brought it back to the UK. It was then treated to a four-year body-off restoration, after which it won the Montagu Trophy for the most elegant car from Europe at the Pebble Beach Concours d’Elegance.

Finally, an honourable mention was given to the Everrati 911 (964) Signature Gulf Edition, produced in association with Gulf Oil International. Gulf is traditionally known as a downstream oil company, but is now actively moving into the e-mobility/electric vehicles sector. The Everrati 964 uses a 53kWh battery pack that provides 500bhp and 500lb ft, around twice that of the original car. It hits 60mph in less than four seconds, and delivers around a range of around 200 miles. The judges liked its style, colours and its zero tailpipe emissions credentials.