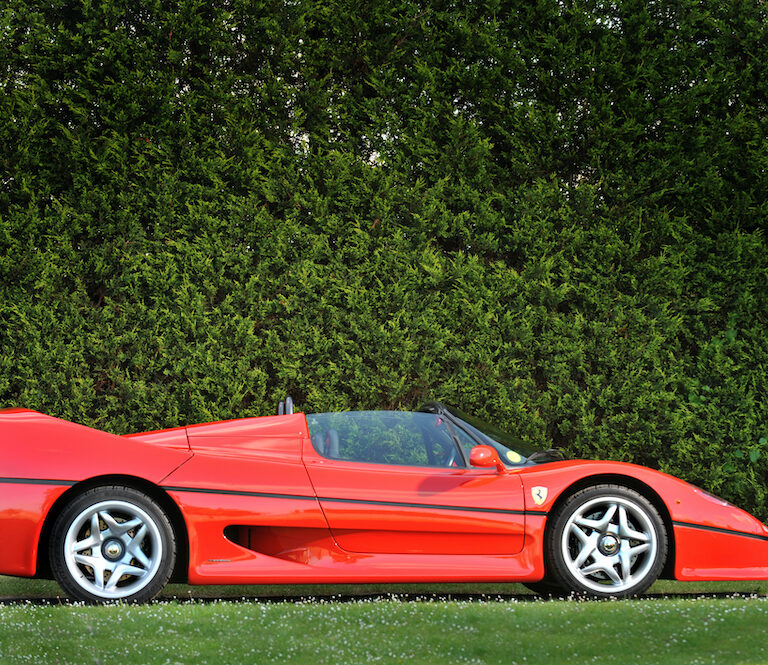 Taking its inspiration from the Pininfarina-designed 1989 Ferrari Mythos concept, the iconic mid-engined F50 (Type F130) arrived in 1995 as the successor to the F40. The two-door, two-seat, targa-top sports car was manufactured until July 1997, with a total of 349 examples passing through the marque’s legendary factory gates in Maranello, Italy.

The F50 featured a 4.7-litre naturally aspirated Tipo F130B 60-valve V12 powerplant that was developed from the 3.5-litre V12 that Scuderia Ferrari used in its 1990 641 Formula 1 car. The model on show at the Concours on Savile Row is one of 302 examples painted in the most popular factory hue – Rosso Corsa. It has a mere 24,000 miles on the clock and was delivered in right-hand-drive format to the UK from new. www.rmsothebys.com

Ozwald Boateng has had a transformational impact on menswear fashion for almost three decades, with a design aesthetic rooted in Savile Row traditions but defined by international style, detail, and artistry. His instinctive use of colour, cut and fabric fuses traditional classic British tailoring with a high end modern design focus on the refinement of a man’s silhouette, this has brought tailoring to a whole new generation of men.