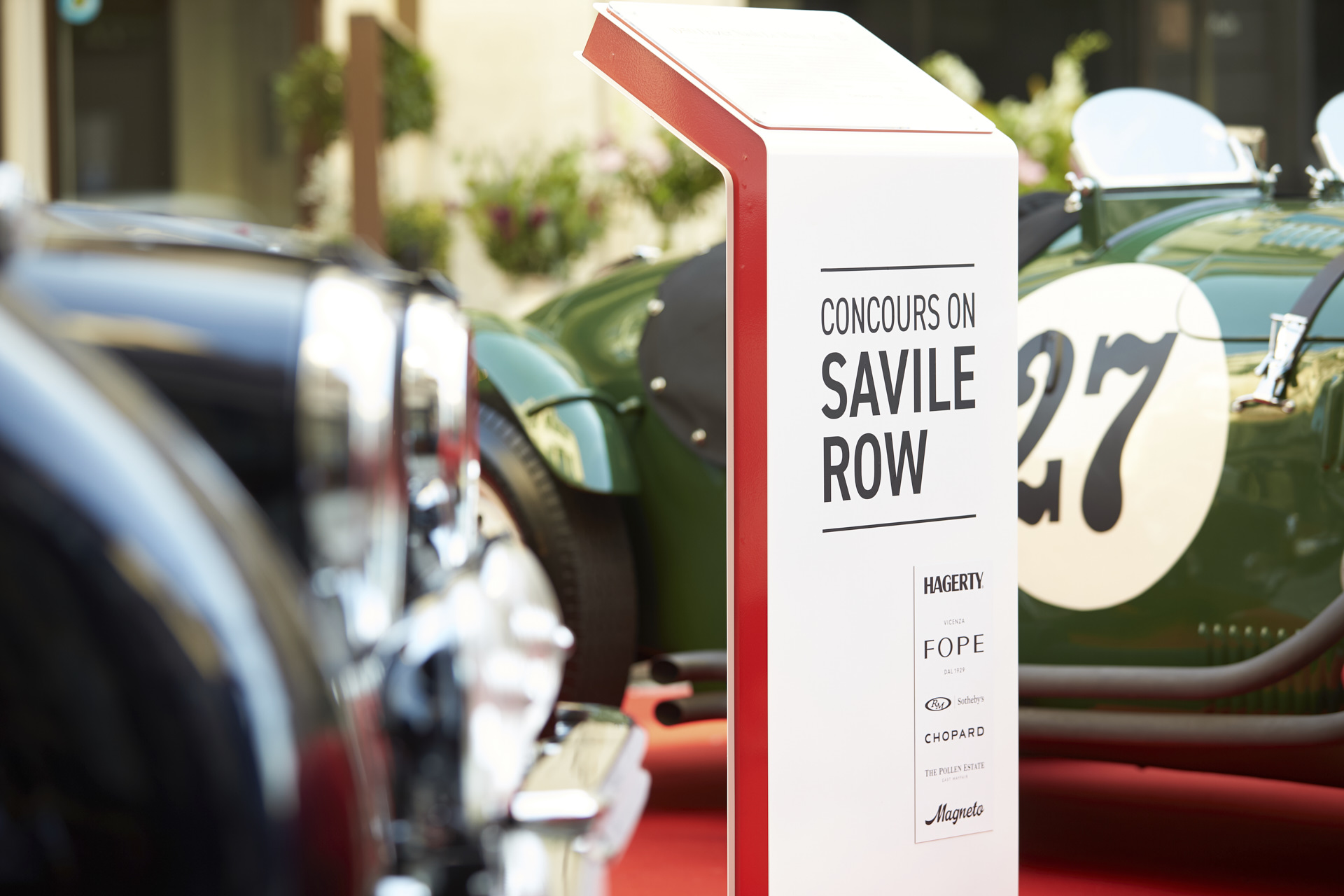 The first edition of the Concours on Savile Row saw London’s famous tailoring street transformed into an automotive paradise on June 15-16.

Characterised by glorious sunshine and cerulean skies, the event saw more than 30 of the finest collector cars line the red carpeted streets for a two day celebration of the ‘art of bespoke’.

This involved pairing many of the concours cars with the Savile Row tailors, who opened their doors to the public for the duration of the event. The event was arranged in partnership with Hothouse Publishing, creator of Magneto, and Pollen Estate, historic owner of much of the world-famous street, with event sponsors FOPE, Hagerty, RM Sotheby’s and Chopard.

“Concours on Savile Row is a celebration of not only stunning cars and garments, but also the craftsmanship and skill of bespoke manufacturing and tailoring,” explained Hothouse Publishing co-founder Geoff Love.

Naturally, the quality of cars on display was in perfect harmony with the sartorial elegance Savile Row has long been renowned for.

Testament to this was the 1950 Ferrari 166MM Barchetta that was crowned Best of Show, judged by the Westminster City Lions with the Hagerty Youth Judging Programme. One of just 25 examples produced, this incredibly rare and elegant machine was built for Italian industrialist and playboy Gianni Agnelli, who was the owner of Fiat and later, Ferrari itself.

Second place went to another classic from Maranello: a 1960 Ferrari 250GT PF Coupé, belonging to Cici Muldoon. One of the last of only 353 examples, the car was commissioned by 1957 European hillclimb champion Willy Daetwyler, and supplied via Eleanor von Neumann’s Los Angeles dealership.

The final step on the rostrum was taken by a Gurney Nutting-bodied 1937 Bentley 4¼-litre Sedanca Coupé owned by Simon Taylor.

Other highlights included the legendary 1934 Barnato-Hassan Bentley, the one-of-a-kind 1986 Ferrari Testarossa Spider and the 3D-printed Czinger 21C – which made its UK debut at Savile Row, as did the new hybrid McLaren Artura.

As well as a live band, the central stage also hosted a fascinating line-up of guest speakers that was headlined by former Formula 1 driver and seven-time Le Mans winner Jacky Ickx, a guest of event Timing Partner Chopard.

“Honestly, the event has been fantastic,” Ickx said. “It’s just been perfect, I’ve been up and down the Row twice and seen all the cars, they’re all really nice. I really like the Everatti Land Rover and the Czinger is very impressive – although I’m not sure how practical it is!”

Association of Heritage Engineers’ Dominic Taylor-Lane proved to be another popular guest speaker, as he underlined the importance of maintaining heritage skills that keep classics on the road and bespoke garments being created.

This sentiment was echoed by Hattie Glendenning, head of communications at Savile Row tailor Cad and the Dandy: “This event is spotlighting the world’s best craftspeople, whether its shoemakers, watchmakers or engine builders. That will absolutely help to ensure those skills are kept alive.”

More details on next year’s edition of the Concours on Savile Row will be announced in the coming months. For more, head to the official website here.